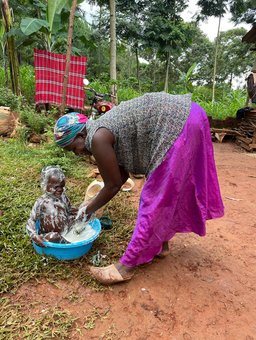 Bridge to Better Future is

It was dark outside. December rains ravaged in fits and beat the windows of the building where the Back to Better Future foundation receives, trains and accompanies undocumented foreigners in a sustainable return to their homeland. My working day was over. The moment I turned off my computer, the bell rang. I got up and found myself halfway up the stairs when the gong reverberated again, now incessantly through the building. I accelerated, grabbed the latch, and unlocked the door. It blew open with force. An icy wind stretched down my cheeks into the hall. I was shocked. A woman hung exhausted against the doorpost. Drops formed a gossamer web over her frizzy hair. Rags stuck around a skinny body, red, eyes staring hollowly at a toe sticking out of her shoe. The bell was muted. 'Help!' she barely audibly extruded and dropped to her knees. I caught her, supported her inside, and offered her tea. Gratefully, she warmed her hands to the glass a little later. "Who are you? What can I do for you?' She remained silent and raised her head laboriously. Tears left shiny marks on her gray, sunken cheeks, dangled briefly from her chin, and then splashed on the tabletop. She coughed, "I am... Grace.' A crying fit prevented her from talking any further. My hand on her shoulder felt her muscles soften. She took a sip: "So much so please." I opened my mouth, but before I could say anything, she continued, "For my children." She landed her head on the table and sighed, "Be a good mother..."

She told her life story: 'In Ghana, I was married off. After the wedding day, it turned out that I was not his only wife. It was not a happy honeymoon. It started with blows to my face when I didn't do what he wanted me to do. Later he used his fists, sticks, and other objects with which he unleashed his aggression on me. He humiliated me in front of others, raped me, and frightened me more and more by the day. He seemed possessed, as he ranted at me. The situation worsened when I became pregnant: I fell prey to bullying and threats from his jealous other wife. I bore him four children. Two died under dubious circumstances. Poisoned! I am convinced of that. In the meantime, there was nothing left of any self-respect. I could only think about the safety of my living children. When he was away with her for a day, I packed my things, placed the children with family, borrowed money, and fled Ghana. Looking for a better future for my children.' She remained silent. 'How...?' I wanted to ask. She looked at me penetratingly: 'I have repressed the flight. I can't talk about that. Too gruesome. I'm scared. My children are at risk if I tell them about this.' I understood. The experiences with many refugees in the past 10 years have taught me not to unnecessarily stir up traumas. "And now?" I asked.

Her dull eyes, where all hope had faded, stared past me: "I really don't remember. In the Netherlands, I sought asylum, received medical and psychological help. They treated my wounds and diagnosed PTSD. Do you know? All the misery would have been worth it to me  if my children were here...' She broke. I asked against my better judgment: 'The asylum application?' She shook her head: "I ended up on the street, without money, papers, and self-esteem. During the day I wandered through the cold Amsterdam for me. At night I looked for a place to sleep at the station, where I was sent away again and again. I couldn't and wouldn't anymore. What was the point of my life?

For example, a care provider found me and put me in touch with Loket for Homeless and with the Bridge to Better Future foundation.' I asked, "What would you most like now?" Her gaze went up: "Back to my children. Anything is better than living here on the street. I want to be a good mother to them, but I don't know how.' I invited her to our Small Business training and empowerment program, with which more than 500 refugees have already successfully started a business in their native country. She managed to gain confidence in our approach, in me, and especially in herself. Her motivation and strength increased. We talked intensively to translate her wishes and abilities into viable activities to support her children, wrote a business plan, and arranged practical matters. Then the time came to implement the plans. I'll never forget the image of Grace at Schiphol. The dejected, soaked, and weakened homeless person who only recently stumbled over the threshold had turned into a proud African power woman with radiant, brown eyes.

She hugged me warmly and then walked to the check-in desk with her head held high. She achieved her first success by guiding the excess weight of necessary items past the counter employee. With a triumphant wink, she turned around and disappeared around the corner towards customs. 'Good luck, Grace!' I cried and hoped for a soon sign of life. That came weeks later as an incoming video call. I recorded. My screen showed a proud Ghanaian with a cap on her head. Under the flap of her hood, sparkling eyes and a smile adorned her face from ear to ear. 'With Grace, director of an NGO!' she laughed: 'It's going great. I now have living space. My oldest child is already back with me. The youngest will follow soon. I feel at home again, at home in Ghana.